Recently a painting that’s pretty well thought to be done by Hitler sold for $143,358 at an auction. It’s not a great painting, but obviously, the painter is infamous.

I’ve often thought about his work, what it would sell for and who would buy it. To have it is hold just a piece of history. A very ugly, brutal, sickening history, but history none the less. I’ve always been fascinated by history in general, the Civil War and WWII specifically.  I’ve read and thought a lot about Hitler and the psyche he had that led him to murder millions.

A recent study came out (can’t remember by whom or when) where they put his voice (how he yelled at speeches and other recordings) into normal conversations. The catch is that some of the recordings they have of him are silent. They read lips and put audible words to them with a normal speaking voice. It was on some history or discovery channel last year.

Anyway, the amazing thing is how totally normal he seemed. The videos are of him in his retreat in Berchtesgaden. He socialized with friends and their families. He patted little kids’ heads as they ran by. He had puppies he played with.  What a strange, strange mind. 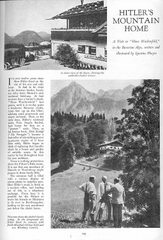